Accessibility at Home Easy to Use Assistive Tech

Benefits of Accessible Games for Older People with Sight Loss

Tags: Accessibility at Home Easy to Use Assistive Tech

We play games because they’re fun! Though of course there are a host of other benefits you might not have considered. From our earliest days, engaging in play enables our brains make new connections. Our bodies learn how to move in different ways, we respond emotionally and our imagination sparks.

As we get older, the benefits of games and play don’t diminish. The connections in our brains are still made and maintained, physical play helps us maintain physical fitness, our minds and emotions are balanced, and our imaginations are stimulated.

We learn so many things through games. From team building and problem solving, to the spirit of competition, communication and fair play. As children and adults, games help us feel loved and encouraged by friends and family.

So how can we continue to benefit from games and play as we get older, particularly if we also experience age-related sight loss? Computer games – especially accessible computer games – could be the answer.

In this blog, we explore some of the benefits of computer games for seniors, and explore how people who are blind or partially sighted can play accessible games with the latest update to Dolphin GuideConnect.

If developed and built with accessibility features that suit older people and people with visual impairments, many computer games provide entertainment, fun and competition from the comfort of home, on familiar computer systems.

Accessible computer games for older people with sight loss provide a host of benefits you might not have previously considered.

The Benefits of Games for Seniors

It seems obvious that we play games because they’re fun! As well as entertainment though, research has shown computer games can have a positive impact on wellbeing and mood. Some studies have linked playing computer games with improved brain activity.

A study of 140 seniors age 63 and over concluded that those who played video games - regularly or occasionally - reported greater well-being, social function and health than those who didn’t play. The study, conducted by the Department of Psychology at the North Carolina State University, also found that there were significantly lower rates of depression reported by the seniors who played video games.

Another study by researchers at Missouri State University concluded that casual gaming can have a more positive effect on mood than meditation or sitting quietly. While participants of this study were college students, its findings support prior research where casual gaming was shown to improve mood, which could mean that playing computer games may help to reduce stress.

Some research has shown a link between playing computer games and improved brain function. For example in 2013 researchers at University College San Francisco found that seniors performed better on attention and memory tests after playing a multi-task video game over a one-month period.

The leader of this study, Adam Gazzaley PhD, Associate Professor of Neurology, Physiology and Psychiatry at UC San Francisco, said “it’s encouraging that even a small amount of brain training can reverse some of the age related decline”.

A study from 2017 found that playing platform games can increase brain activity. The study of adults aged 55 – 75 found that subjects who played the video game Super Mario 64 saw a significant increase in their hippocampus grey matter which was not seen in control groups and claimed theirs was ‘the first study to show that video game training can have a positive effect on the hippocampal memory system of older adults’.

It’s easy to dismiss computer games as something for technically-advanced, younger people. Clichés of lonely teenagers in dark rooms do nothing to diminish this, but gaming has moved on significantly, and so have the people who play.

Technological advances have made gaming a more sociable activity, one that brings people together from all over the world. It can mean big money in global tournaments with millions of dollars prize money, and more importantly gaming is increasingly encouraged to be an activity where all family members - of all ages and abilities - can take part. 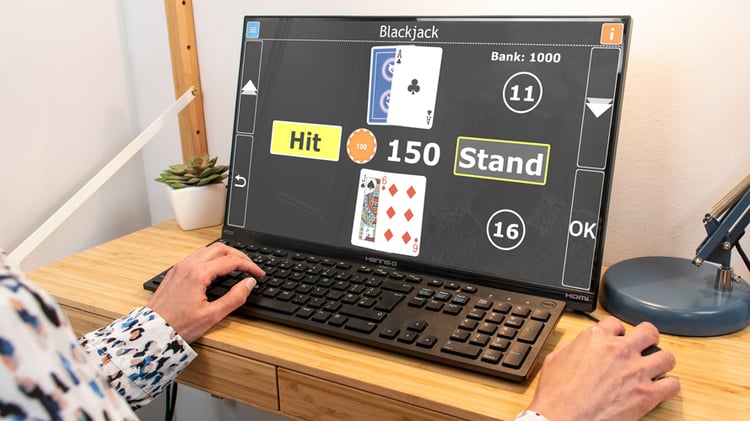 GuideConnect is easy-to-use computer software, developed for elderly users with sight loss, and who may have little experience of computers. Its simple menus have clear icons and text that can be adjusted to suit the users vision. It also has a speech function so users can listen to the information as they play on screen.

Simple computer versions of the familiar games - Sudoku, Hangman and Blackjack – are found in the GuideConnect Entertainment menu. They are easy to control, simple to access and are available to play on different levels.

Choose computer games on GuideConnect to help maintain the spirit of play and the benefits that come with it. At the very least you’ll have lots of fun!

Dolphin GuideConnect is easy-to-use assistive technology that empowers people with sight loss to retain their independence and privacy. Simple step-by-step menus help users easily navigate tasks and the settings can be customised to the user's own sight and preferences.

Available on a range of different devices, with different screen sizes, GuideConnect means people with sight loss can choose one which is best for their lifestyle and experience of technology.  You can use GuideConnect on a desktop PC or a laptop computer, a Windows tablet and even through your own TV screen via a special GuideConnect box that connects to your television. We provide a Dolphin Remote Control to operate GuideConnect from the comfort of your armchair!

GuideConnect requires no previous experience with computers, it’s quick to learn and simple to use. Support and training is always available for users when they need it.

Other ways to find accessible games

Accessibility in computer games is gaining more prominence in the gaming community. For people who are blind or partially sighted, games are available from different sources. They can be browsed and downloaded from app stores to play on smart phones or tablets.

Alternatively, games can be played using assistive technology on websites, or with software for specific games such as chess. Visually impaired people who love chess can access their favourite game in accessible computerised formats through Accessible Chess Software, the US Blind Chess Association or the Braille Chess Association

For traditionalists, board games with Braille are also available.

More experienced gamers and games designers could benefit from exploring Accessible.Games - A New Approach to Game Accessibility a website run by the charity AbleGamers to promote and provide new ideas and resources to help keep games free from accessibility barriers.

Developers and designers might also benefit from the resource articles in Game Accessibility Guidelines - A straightforward reference for inclusive game design. This offers a wide range of really useful rules to follow to make games accessible for a people variety of disabilities, including vision loss.

Further reading can be found in this blog on the challenges faced by games designers when considering accessibility. Blind and Low-Vision Accessibility Guide - Can I Play That?

Jamie McAllister: What assistive tech means to me