Easy to Use Assistive Tech

Tags: Easy to Use Assistive Tech 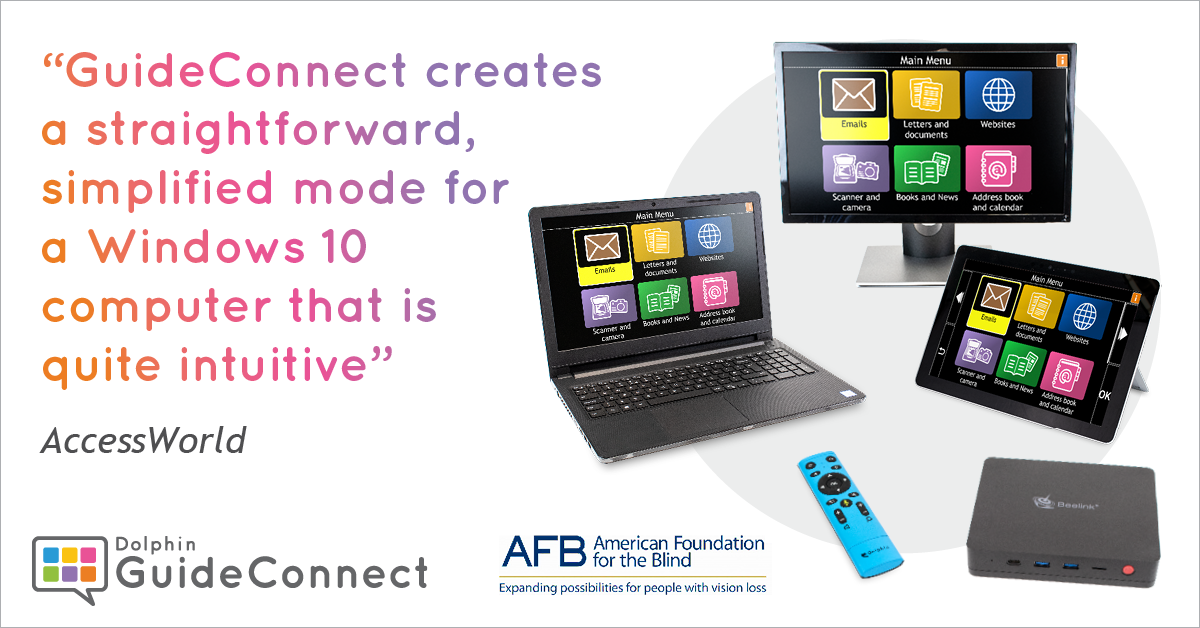 We’re delighted to have GuideConnect featured in the June AND July issues of American Foundation for the Blind’s (AFB’s) wildly popular magazine, AccessWorld.

While AFB was originally formed to serve American Veterans who became blind as a result of World War 1, AFB is known globally for having led the development of standardized English Braille code, developing the first Talking Book and Talking Book Machine and so much more. So when AFB asked to feature GuideConnect in AccessWorld, we were not only honored, but also thrilled with their review.

“Dolphin's GuideConnect does a really good job of making the computer a more useful  device for the new user.”

For those of you just learning about GuideConnect, in the most basic terms, GuideConnect is a self-contained computing environment that talks. GuideConnect circumvents the Windows desktop placing users in a closed environment and then presents a fixed list of common computing tasks to choose from. Accessibility is built-in, invisible, and always there to support the user.

“GuideConnect creates a straightforward, simplified mode for a Windows 10 computer that is quite intuitive. The interface enables access to the computer with a combination of text-to-speech and screen magnification that really feels like it's built right in rather than added on as an afterthought.”AccessWorld

Things a user can do in GuideConnect include but aren’t limited to:

“Although GuideConnect provides a simplified user interface for menus and navigation, it comes with a wide variety of applications.” AccessWorld

GuideConnect has everything a person needs to keep living independently and managing their affairs, while staying connected to their family, friends and community. And don’t forget about the variety of entertainment options to enjoy!

“The terms "easy-to-use," "simple," and "basic," sometimes have negative connotations in the world of tech, as if whatever they are being used to describe may not have all the latest features. For people who are getting used to assistive technology, however, extra features may just be clutter that gets in the way of getting the job done, or may contribute to a steeper learning curve. Dolphin’s GuideConnect changes that.” AccessWorld

You can read the AccessWorld Articles in their entirety here:

Using a computer is easy with GuideConnect